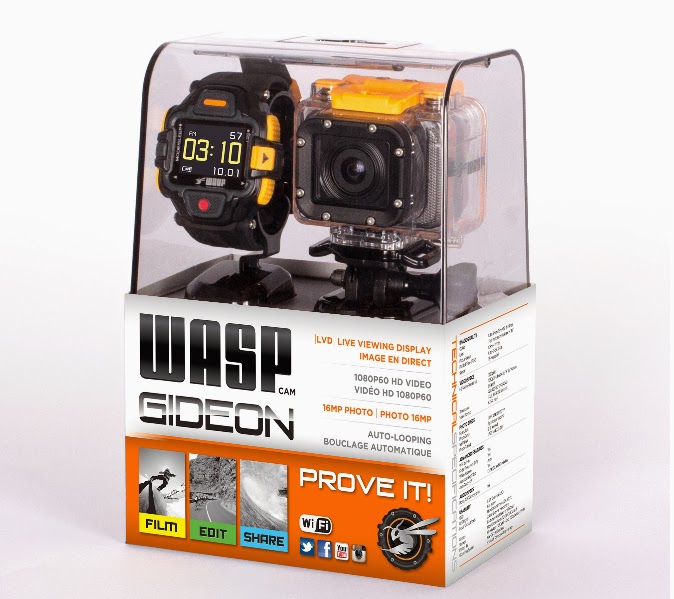 A new camera company has emerged in the action camera market and their latest offering is creating a lot of buzz. WASPcam, which hails from Canada, has pushed the envelope in feature and price with two new offerings which just launched January 15th.
The WASPcam Gideon is possibly the most feature rich camera currently on the market straight out of the box. The Gideon records HD video up to 1080p60 (and also 1080p30, 960p60 and 720p120), takes still-images up to 16MP and has built-in WiFi. You can connect the camera to your iPhone or Android phone for live viewing.
The Gideon sets itself apart with its wireless wrist remote, which connects to the camera via Radio Frequency, giving users a live viewing screen and remote control. The wrist remote connects from up to 15 feet away and also doubles as a watch.
In addition to the camera and wrist remote, the Gideon also comes with several accessories in the package. Two different camera mounts, fog inserts, waterproof and vented backs for the waterproof case, a wall charger and Velcro strap top the list.
Possibly the biggest surprise with the Gideon is the price. MSRP for the Gideon varies slightly based on the state purchased but in most markets it is $319.
As more of these cameras reach consumer hands, side by side comparisons of video performance in varying conditions will become more readily available. 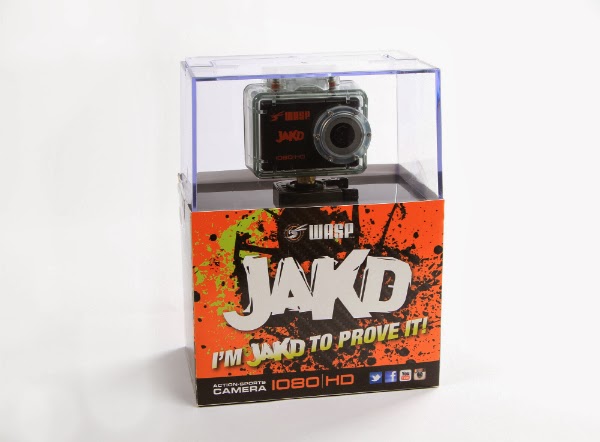 Piquing the interest of consumers looking for a value priced camera with plenty of options is the second new offering from WASPcam, the JAKD.
The JAKD camera can shoot [email protected] or [email protected]
While it may not be ideal for video pros, the novice and intermediate videographers can enjoy capturing their adventures without wiping out the bank account. At only $139 in most areas, the JAKD camera is low on price and high on options.
The most impressive option that is included is the two inch LCD touch screen on the back of the camera. Additionally, the JAKD comes with a waterproof case, helmet mount, handlebar mount, wall charger and more. Just when you thought it couldn’t get any better, the JAKD camera also has infrared night vision and auto loops when recording so if you didn’t get that shot you wanted in the first pass, keep it running and it will record over it!
While I can’t make a formal recommendation because I haven’t tried the cameras yet, the specs and price point for each seem very appealing. For someone looking to getting into shooting some action videos, the offerings from WASPcam warrant a look.
Posted by Chris Payne No comments: Links to this post
Email ThisBlogThis!Share to TwitterShare to FacebookShare to Pinterest
Labels: action cameras, Chris Payne, Gideon, JAKD, kayak fishing, paynespaddlefish.com, reviews, WASPcam
Older Posts Home
Subscribe to: Posts (Atom)