Four Tips to Find a Great Deal on a Kayak 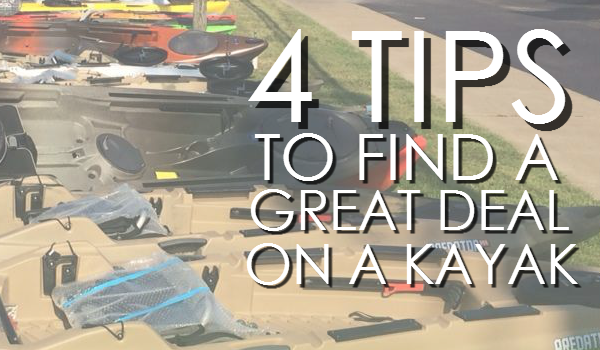 Labor Day marks the end of summer for most folks. It's back to school time for the kids. Businesses are starting a new fiscal year soon and the holidays are within sight. What Labor Day also marks is the beginning of sale season for kayaks.
Kayaks, both used and new are at the end of their cycle for the year. Dealers are reducing old inventory for the winter months, increasing new year models, doing some trade-ins, selling off the rental fleet and clearancing out. They know the pattern. It's their business. Craigslist will be flooded with people needing to sell a kayak for this or that. There are nomadic, seasonal kayakers who often sell a boat just to make a lease payment for deer season. Then there is dad, who thought he could convince the family to kayak with him, who instead is needing to sell a tandem to get a solo kayak. It takes all kinds. Often it works out for both parties. Everybody gets what they want and the cycle continues into next year.

Commonly thought of as a summer time hobby or sport, kayaking enjoys a bolus of participants between May and September. The crowds on local lakes start to thin more and more as the weather becomes more tolerable. Hunting season has started and for some that means dove hunting and then deer hunting. For me it's always DEAL hunting.

Over the last several years I have used fall and winter as a time to upgrade. Often, there are folks looking for a boat I have, rigged and ready to fish and are willing to pay a fair amount for it as is. I'd then turn that money into a better deal for me by finding great deals. Here are a few tips to help you find a great deal:

1. Look at Buy/Sell/Trade Sections on Your Local Forums

Chances are you belong to a local forum or six. Kayaks can often show up here for not a lot of money. Make sure you do your research though. A few unrealistic (or opportunistic) folks will try to get you to pay retail prices for a used kayak. Don't want to risk getting swindled? Check out the next tip.

2. Call a Kayak Dealer or Two

Dealers can't advertise their best prices. The kayak market for the most part has fixed pricing. If you can go in store it is even better but sometimes a phone call works if you are far away. This time of year it is very important to move inventory from the previous year. Brand new kayaks needing new homes can be had at better than used pricing very often. Don't believe me? Call HOOK 1 at (866) 486-8412 and ask if they have any deals. Tell them Chris sent you.

Depending on where you live, CL can be filled with kayaks. In Texas, especially Dallas, Austin and San Antonio options abound. Just please, reread #1 and do some homework. Some sellers will try to take advantage or just really have no clue that a kayak depreciates. Take a buddy, meet at a place where you can demo the kayak. Speaking of demos.

Don't be a knucklehead like me and buy a kayak you've never paddled. It's exciting and sometimes the deals are great but what if you drop $500 or $1,000 on something that you hate. Good luck reselling for the same price. Demo at least the model if at all possible. It doesn't have to be the exact kayak but at least a very similar one.