The Stability Myth: Standing in a Kayak 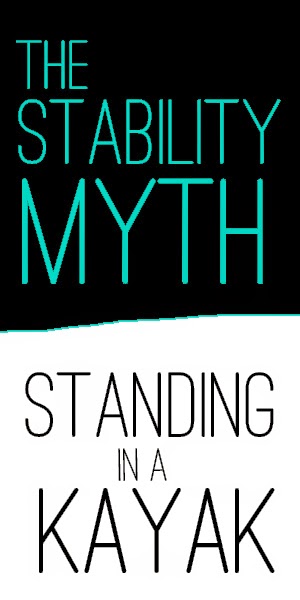 Standing is the new thing.

In kayaks that is. And frankly, it's not all that new. As people flock to the sport they see commercials, ads, pictures and videos of people standing up and fishing from a variety of kayaks. I've seen almost every major manufacturer release an ad for one of their kayaks where someone is standing up and fishing. It's the hot issue. If a company doesn't have a kayak that they sell for standing and fishing they are behind the times.

All that being said, these pictures and videos can be misleading. The design of the kayak, its hull, its width and the water conditions all play into stability so that a fisherman can stand. Not enough people, especially those shopping for a "stand and fish" kayak are looking at the biggest variable: the fisherman.

People are all built differently. People also have different levels of balance. I can stand and fish on an Outback, a Slayer, a Coosa, a Ride, a Commander and a ton of others but that doesn't mean you can.

Drew Gregory from Jackson has jumped and spun around on the deck of at least one Jackson in a video. Here is the not-so-secret secret. Drew is a compact, fit guy who works in the outdoors and is in great shape. His balance is impeccable. I've seen more than a couple of people turtle a Jackson. It's more than just kayak specs that make a kayak standable. It's you too.

But wait! I can hear some of you who have been watching a different set of videos. "I'm built more like Chad Hoover and he can stand in all of the Wilderness kayaks" you say. Well, yes, Chad can. Did you also know he is retired from the Navy? I think he may have the boats, balance and water thing down better than Joe from down the street. Wildys can turtle too. All of them can.

I've seen a Hobie Pro Angler turtle and not in the ocean. It was on an calm day on a small lake. It's about the fisherman too, not just the kayak.

So what am I saying?

If you want to stand, here are some things to think about.

If you are standing on a sit on top kayak, you have to balance from your ankles up. That is a lot of core balance for a lot of people. If you are big in the shoulders or big in the belly, this is going to prove more difficult. Slight framed folks and shorter folks will generally have an easier time with this.

Think about balancing a broom handle, vertically on your palm. It's difficult, right? Add a tennis ball to the middle of the broom handle or to the top and it becomes more difficult. Weight across your body that is not evenly distributed (beer gut) will be more difficult to keep in balance when the balance point is further away.

So how do we make it easier? A few things.

Having a wider platform to stand on makes this easier. It is easier to balance when your feet are able to be shoulder width apart and slightly more. Most adults have a shoulder width wider than 20" so a deck that only allows 20" with a total kayak width of 28" will be more difficult to balance on. As the width of the total kayak gets wider, even if the deck isn't as wide it will become easier to balance. The ideal situation is a wide deck and a wide kayak. Finding a 28"+ wide deck with a 32" or larger total width will help.

Also consider the seat. More people that I have seen turtle have done so when getting into or out of the seat. A seat that is up off the deck will be easier to gain your balance. Is it easier to stand up from the floor or from a chair? The chair, right? Keep this in mind when shopping. Even a couple of inches gained is a big change.

What if we could change the balance point from your ankles? You can! The problem with kayaks is in most circumstances as they get wider, they get slower and more sluggish to paddle (the obvious exceptions are pedal and motorized kayaks). This is where hybrid kayaks come in. The Commander from Wilderness Systems and the Ultimate from Native are hybrid kayaks that are part sit in and part sit on. They look more like a canoe than a kayak to some (though the hull design is different). When you stand in one of these kayaks you have a sidewall to brace your leg against. This raises the balance point from your ankle to almost your knee. It's almost as if you've made yourself shorter. The amount of body you now have to balance is lessened and the 31" wide Commander offers more stability to most people than a 33" wide sit on top. Not only that but it generally paddles faster as well in the longer models.

Now that you are either confused, angry or nodding your head in agreement, let me offer a suggestion. If you want to stand and fish out of the kayak you are shopping for, stop looking at marketing material. Find a demo day near you or a get together or Boondoggle and go try to do this yourself. Find out how hard or easy it is to stand in all of the models you are looking at. Demo. Demo. Demo. If you absolutely can't do that and you have to shop online by specs and videos only, look at total width and width of the cockpit. The bigger they are the more stable. Is it a guarantee that you can stand? No. Will it be more likely? Yes.

It will almost always be easier to stand in a kayak that is 40" wide than one that is 20" wide. Just keep in mind the balance points and demo if at all possible and you should be good to go.

If you want to stand in a kayak, make sure you can before you buy it!
Posted by Chris Payne 4 comments: Links to this post
Email ThisBlogThis!Share to TwitterShare to FacebookShare to Pinterest
Labels: Chad Hoover, Chris Payne, Drew Gregory, fish, hobie, jackson, kayak, kayak fishing, myth, native, stand, stand and fish kayak, wilderness systems

Fish are Talking. Are You Listening? 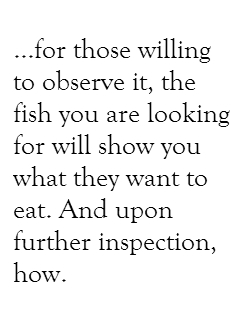 I relearn this lesson time and again. A story from last spring stays in the forefront of my mind especially in spring.

While scouting kayaking locations from the bank one morning, my brother and  I found bass actively feeding on shad. We launched the kayaks and set off in hot pursuit. After 45 minutes and zero strikes on myriad baits, I changed my mind. I reanalyzed the situation.
What were the bass feeding on? Shad.
What size were the shad? About two inches.
What colors imitate shad? White and silver.
What speed were the shad moving? Fast.
What baits did I have that I could mimic the shad? One. An Excalibur XR25 Lipless Crankbait in Sexy Shad.
I tied it on and second cast landed a fish. I immediately called to Lance and let him know what the pattern was. He tied on a Strike King Red Eye Shad in Chrome and started catching them as well.
Why did I spend so much time throwing my confidence baits? Because I was confident I knew what the fish wanted. They told me otherwise with their closed mouths near my baits and continued feasting around me. The fish offered display after display of what dinner they preferred. I just didn't want to see it. I wasn't actively watching for it.
Sometimes we need to slow down, watch, listen, learn from our surroundings and then and only then, using our acquired knowledge from past and present, give the fish what it wants to which it in turn will give us what we want.
This lesson applies to more than just fishing though sometimes it takes a day on the water to remind us. A simple fish can teach us what we refuse to hear from others. Well played Mother Nature. Well played.
Posted by Chris Payne No comments: Links to this post
Email ThisBlogThis!Share to TwitterShare to FacebookShare to Pinterest
Labels: baits, Chris Payne, fish, kayak fishing, nature, patterns, pay attention
Older Posts Home
Subscribe to: Posts (Atom)