A Lesson Learned: Long Walks with a Kayak

In 2003, my new Pelican Endeavor (sit in kayak) in tow, I took my first long hike with my kayak in search of the elusive honey hole. I was very new to the sport and didn't want to spend the money on a kayak cart so I  rigged up a golf club caddy and took off down a long dirt road, a road that hadn't seen a car in twenty years. I was smart enough to bring a buddy with me and he had a very similar setup.

The road was old, sometimes rocky, sometimes sandy and had ruts running on both sides that had been there for who knows how long. Going around turns in the road was an adventure as you usually spooked a wild hog or deer or had to work around a rattlesnake. It was as close to an American safari as I've ever come. The landscape snarled with yucca, prickly pear, mesquites and cedars. It taunted us to make a wrong move. The hike, all gear and kayaks in tow was just over a mile. Because our "carts" weren't made for this terrain, it took several adjustments and close to 45 minutes to get to the water we were so desperately seeking. We saw it up ahead. A sharp rise of about 20 feet. A berm that stretched a few hundred yards was actually the dam on this honey hole and we knew it. With renewed spirits we made the climb and saw what we had come for: the honey hole.

I had bank fished this little spot in northwest Texas once before and had decent success but this time I was prepared with my new boat and a conquering attitude. We unstrapped our kayaks and quickly were on the water. Paddling toward a tree line that looked promising we were greeted by a pair of water snakes who seemed very curious about our kayaks, possibly the first ever on this lake. Two casts into the day we both hooked up and that pattern would continue for most of the day.

Time melted away and what had started at sun up quickly blended into late afternoon. We needed to get back. We hadn't prepared to be out after dark and had no lights to navigate back so the pace was brisk. The walk to the honey hole had been apparently been downhill because walking back to the car was agonizing. Shoulders worn from paddling and fishing all day made the kayak and gear feel like it was an elephant being pulled along on a tricycle. The boat kept sliding off and we kept getting stuck and we were only 100 yards from where we started. As I tried to pull the caddy out from another rut the scariest thing I hadn't known could happen, happened. The bearings and axle on the golf club caddy cart gave way. Broke in two. Now what!?!

After an attempted repair job and failure, I relegated myself to dragging it back. I didn't know what kind of damage it would do but I wasn't going to leave it and there was way too much gear to pack it out. Carrying it was out of the question. I had a 50 foot long anchor rope which I fastened into a harness and started pulling. It was hard work. I felt sorry for every plow horse and mule I had ever seen. My friend, being the good sport he always is, rotated shifts with me dragging this albatross back up the winding, rutted, mine field of rocks and cactus.

Nearly two hours later we reached our destination, completely exhausted and sun baked. I immediately started downing any available fluids I had. Though it had only been about 80 degrees I am sure my core temperature reached liquid steel a couple of times. We sat until dark, recovering and learning rapidly from our mistakes.

I learned so much about having the right tool for the job, preparation for the worst case scenario,  and how to plan for a trip just from that one outing. A steep learning curve leaves scars sometimes.

I haven't been back to that spot since. I have bought better equipment though. I have also been game planning with every possible scenario. Knowing what you are up against is a good battle but the unknown is the one that will ruin a day.

Plan well and invest in a good cart.

Looking for a good cart?

Here is a good option from HOOK1: (Click here to purchase)

Yesterday was a first for me. I fished my first official kayak bass fishing tournament with the North Texas Kayak Bass Fishing Club. I had a great time with these guys over the weekend and would do it again in a heart beat. And while these guys are great, this is not a piece on promoting the NTKBF tourneys (though I need to do that). This is a piece to confess mistakes, make some lists and hopefully pass on some knowledge to future tournament kayak anglers.

Ruler Board/Hawg Trough
Most kayak tournaments use the Catch-Photograph-Release (CPR) technique to determine a winner. If you buy a hawg trough from one of the many retailers like Austin Canoe and Kayak, they come marked every inch. They do have ridges so you can measure up to 1/4 of an inch but they are the same color as the board. You quickly find out at "weigh-in" that those 1/4" lines are very important and very hard to see in a picture. Take a sharpie and run over those ridges and the judges will never have to guess. But to even get a picture, you have to keep the fish on the board. This is a dexterity challenge while floating in a kayak with a paddle, a fish with hooks in him trying desperately to stab you with the hooks, a trough and camera, not to mention the required identifier that has to be in the picture. A friend, Bryan Row, had a great idea and attached three small bungees to the board so he can strap the floppy slime rockets to the board for a picture. It was ingenious and I had to pass it along. It must work because Bryan placed second this week!

Confidence Baits and Techniques
You know them and use them. They are your go to baits and styles. These are usually the first thing you go to when a new method or bait is failing after the first 10 casts that you tried it. Mine is a drop shot rig with a F4 Hag's Tornado. I can catch fish out of a dry sewer line with this setup and yet I didn't fish it on tournament day until an hour before weigh in. Why? I over thought the lake. I had never fished Purtis Creek before except for pre-fishing the evening preceding the tournament. In that time I tried what people told me would work, different locations, depths I normally didn't fish and it hurt. At 12:30 I had two fish out of five and I caught those in the first 30 minutes of the day. When push came to shove, I switched back to my confidence setup and was rewarded with the three fish I needed to round out my limit. They were not huge by any stretch of the imagination but five fish on tourney day is never a given. The lesson here? Don't deviate. After talking to the winner, rodmaker Walker Nelson, my thoughts were reaffirmed. He said he stuck to his game plan and didn't deviate. Congrats on a great win Walker!

Planning and Homework
I spent the better part of the last two weeks planning for this event. I scoured what topographical maps I could find and used overlays from satellite maps to determine the most likely places I could catch fish. I prefished the day before and did okay but felt lack luster about it. At dinner that evening I got some tips on where some fish were. After a slow morning I abandoned my plan and spent the next three hours chasing someone else's plan. That did nothing for me. In the time I left my prep work and techniques at the door, not a single fish came into the boat. Not a single, solitary fish. When I abandoned other plans and went back to my own, I caught the rest of my fish for the day. Lesson learned. If you doubt this, go back up a paragraph and read Walker's comments.

Always Be Prepared
You just never know. It will creep up on you when you least expect it so pack accordingly. Not all of these things happened to me but some unexpected events at the tournament this weekend produced a bit of hilarity, some panic, some disgust and even some hunger. 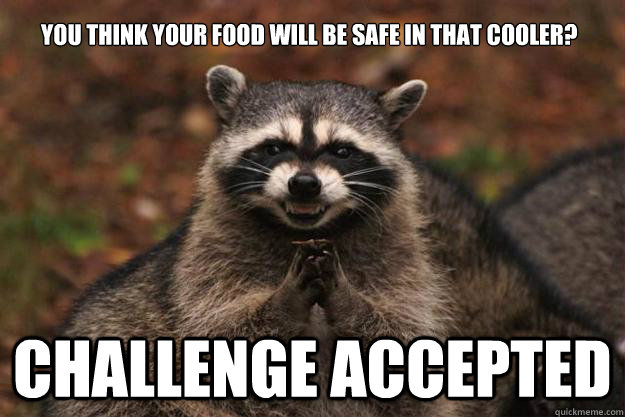 Raccoons will steal your food. All of it.

Branches barely sticking out of the water get caught in scupper holes. Have a plan. And a saw.

The sun doesn't rise until well after 6AM this time of year. Have what you need to be legal on the water.And a light to see the dangers.

You can get sunburned even when it's raining.

Cameras fail. Have a backup plan.

Until next time, keep your food in the car and stick to the game plan.