If you've been looking for a paddle for under $150, today's Paddle Battle is for you! Two candidates take the stage today that I have been paddling with for about 40 hours each. While the price is the same, these paddles offer very different features. Here is the tale of the tape: 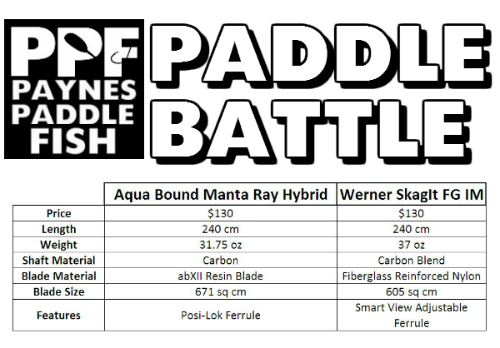 The Aqua Bound Manta Ray Hybrid is a lighter paddle with bigger blades. Bigger blades however, do not always equate to more efficiency in the water. The abXII blades are stiff but I would not say rigid. You can curve the tip of the blade a bit. This is not unexpected as lighter paddles often have less rigidity and thickness in the blade, not always, but usually.

I liked paddling with this paddle. I used it to push off a few times from shore and it didn't snap or give too much. It did flex which gave me pause at first but I soon realized it could handle it. Paddling I felt like the water movement was good and efficiency was where I needed it to be. In the high seat position of the Native Slayer I could really reach the water and not have to concentrate on my stroke as much because the blades are so big. In the Malibu Mini-X, sitting low I was able to skim the water without having to dig and it still moved me right along. I did prefer this paddle in the higher seated positions.

The Werner SkagIt FG IM is a little heavier than the Manta Ray but is a rigid bladed paddle. The SkagIt worked amazing for pushing off, standing and paddling and many other uses. Where it lacked was in surface area. When in the Slayer, I had to concentrate harder on my paddling to make sure I was getting enough paddle surface in the water. I didn't need as much surface area but it was a retraining exercise. When in the Malibu, the low seat paddling was a breeze. You are at the perfect position for the paddle to work at its highest efficiency and can straight up move in a low seat kayak.


I liked both paddles. They both had cool ferrule features that lesser paddles just don't offer. Both had an area they shined in. For paddling an elevated seat kayak, I would recommend the Aqua Bound. For a low seat, I would get the Werner.

If I needed a paddle for both situations, I would choose the Manta Ray because almost all other things being equal, the weight is 5.25 oz less. That makes a difference on the water, especially for long trips.

The best way to choose the right paddle for you is to demo, demo ,demo. Ask a buddy to borrow his, go to a demo that a local dealer is having or even just go into the store and hold one. Making an informed decision is always the best way to go. Both of these paddles are available at Mariner-Sails in Dallas.
Posted by Chris Payne No comments:
Email ThisBlogThis!Share to TwitterShare to FacebookShare to Pinterest
Labels: aqua bound, Chris Payne, manta ray hybrid, mariner-sails.com, Paddle Fish, paddles, paynespaddlefish.com, reviews, skagit, werner
Older Posts Home
Subscribe to: Posts (Atom)