The question has been posed. The tables are being set now. The eyes of many are now turned to what was once a few. The direction of kayak fishing tournaments and their future are being decided. Right. Now.

More retailers are selling kayaks than ever before. Retailers that once only carried a couple of kayaks are expanding their fleet of options. Companies like Dick's Sporting Goods, Academy Sports and Outdoors, Bass Pro Shops and Cabela's all want a piece of the pie.


Our sport is growing and companies see that.

With growth comes new ideas, new people and new problems. People who may not have the years of experience that some of the old guard do are wanting to advance the sport. Normally this wouldn't be a problem but the direction they want to go is met with mixed emotions.

The overwhelming divider is whether kayak fishing needs a national tournament trail, a governing body and a standard set of rules. Some people want to leave it as 100 different little local trails that do their own thing. Others want a trail like Bassmasters Elite or FLW to really up the prize money and national draw. So which is right?

The discussion is everywhere across the internet but is really sprouting in a Facebook group that has 720 members called the "Angler's for the Advancement of Kayak Bass Fishing Tournaments".  Tournament anglers from all over the country discuss logistical, theoretical and idealistic ideas that they feel will aid in guiding the direction of tournaments into the future. Well, at least that's the idea. Beau Reed is the groups creator. He runs a kayak bass tourney trail in Texas. Check out the Mission:


The problem is the group can be a think tank for some but a pulpit for others. Rather than talking about ideas, some have made it their priority to point out flaws in any person's idea yet never offer a solution themselves. Always the critic. Never the creator. We have plenty and don't need anymore.

We have a rule at my office. It's ok to bring problems to the boss, but think about and bring possible solutions when you present the problem. Bring solutions! I think that's what the group needs. Problems + Solutions = More Fruitful Conversations.

So why bring this up?

It's important for many voices to be heard as this discussion is formed. I'd love for more people to join the conversation. Most of it is helping move the sport forward and allowing participants and directors to exchange ideas from across the country. It is my belief that this COULD be the basis for a mainstream trail in the near future. If that's the case, are there things you have questions about, want to give input on or discuss with people from the other parts of the world? This is a great place to do that.

I would encourage you that when you bring a problem, also bring a proposed solution.

Want to join and see what the buzz is about? Click here:
Anglers for the Advancement of Kayak Bass Fishing Tournaments

Yesterday I snuck away for a few minutes to run through Academy. I try to go by once a week and check
on clearance type things, see if any new baits have made it into their rotation and just spend some time looking for treasures. As I strolled down the kayak aisle I saw a couple visiting about kayaks. I just couldn’t help myself. 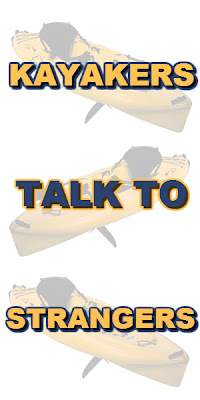 I asked if they were looking at getting into kayaks and it turned into a half hour infomercial about what to look for. They had tons of great questions and expressed appreciation for the visit. It reminded me that the questions I asked years ago often go unheard by people who actually kayak. Just a few resources exist for folks who aren’t in the community yet. At least they don’t know they exist. Sometimes we stay in the bubble and assume people buying kayaks are hooked into all the networks that lots of folks reading this are connected to. Fact of the matter is, they aren’t.

As I mulled over the conversation last night, I started to build this article because of a question.
“If I had to tell a first time kayak buyer everything they need to know, in a very limited space and time, what would I tell them?”

Here is what has materialized:

In Texas you need two things to be legal during the day. You need a lifejacket and a whistle. If you paddle at night, you need a 360 degree light visible for up to two miles. Get a waterproof whistle and a lifejacket that has mesh on your lower back. It will be much more comfortable.

A sit on top kayak is more versatile than a sit in kayak. You might need to wear more clothes in the winter but if you fall in, you’ll be glad you have a sit on top.

Don’t spend all your money on accessories. For a first time paddler, you won’t appreciate the difference between a $50 paddle and a $500 paddle.

When you pick a paddle, hold it up beside you. You should be able to reach up and barely get your fingers over the edge of the blade. If you can’t reach it, it’s too long. If your hand goes over the top, too short.

Get the best kayak you can afford. Don’t stress over what other people will think. If it gets you on the water, you are in the club. Very few kayakers, especially fishing kayakers, will judge you by the type of boat you paddle.

Kayak with other people. If you are going by yourself, tell folks where you will be and what time you will be home.

The kayaking community is great! Almost every person you meet is friendly and will help however they can if you are in a bind.

Visit Payne’s Paddle Fish for more details on any of these items.

Join a forum or two to ask for help and talk to folks who are kayaking and/or kayak fishing.
If you can, demo, demo, demo. Many shops have days each week set up for demos. Mariner-Sails in Dallas has appointment days every Thursday and some Saturdays as well (weather permitting).

Go to a Get Together (GTG). April 20 is the date of the next one at Grapevine Lake. For more info check out this link: http://texasfishingforum.com/forums/ubbthreads.php/topics/8589747/1/OFFICIAL_Spring_2013_Yak_Angle

If you ever have questions, ask! I’d be happy for you to email me or leave a comment. [email protected]

I know the list could go on forever but as succinctly as I could, these are the things I would want to make sure I covered.


Here are the three ways you can enter:

Option #2
If you "Subscribe" to Payne's Paddle Fish = 1 Entry

You may enter with all three options. People who have liked, followed or subscribed previously are already entered.

The Rules
There must be 100 new entries for a winner to be chosen. We will be running this contest for one week so please get the word out. If the 100 new entries are not reached, one extension period of an additional week may be granted. If not reached at that time, the contest will be void.

To help this along I will add in one more way to enter:

Option #4
If you share the posting about this contest from the original Payne's Paddle Fish Facebook Page or from Chris Payne's personal Facebook page you will get an additional entry. IT MUST BE FROM THE ORIGINAL POSTS. Shares from friends shares will not garner an additional entry.

I realize this is Facebook heavy but most of my blog marketing is done via Facebook. Option #2 is a way for everyone to be able to enter with just a valid email address. Any discrepancies will be handled by Payne's Paddle Fish. The winner will be announced via Facebook and on Texas Fishing Forum the day after the contest ends.

Good luck and get the word out!