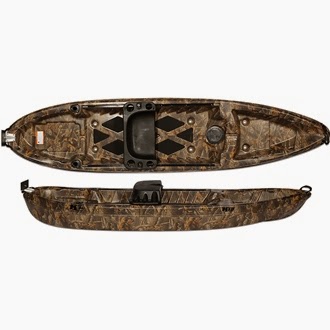 KC (Kajun Customs) Kayaks is a kayak company comprised of four graduates of Louisiana State University. It's no surprise that their K12 design is thought of with the saltwater and skinny water fisherman in mind. Recently I spent a few days in one, a bit out of its element in a deep freshwater lake. At the same time I tested out two new offerings from KC, the white bass boat style seat and the metal support frame that goes with it.


This is a skinny water kayak. As soon as I pushed off from the ramp I could feel the glide. I wanted to try to turn and with one paddle stroke the kayak spun about 135 degrees. It was impressive. Paddling was an easy task as well. At 12 feet, the K12 tracks pretty well. It has minimal nose walk. Sitting up high in the upgraded seat you will want a longer paddle (probably 260 for most folks) and it will also help when standing and paddling.

Speaking of standing, the KC is pretty darn stable. At 34" wide with a lot of surface area on the hull, the K12 is one of the easier kayaks to stand in that I've tested. Having a higher seat makes that task even easier.

The other place where the K12 will shine is with fly fishermen. The deck layout is very clean and free of clutter. The additional non slip foam in the floor also helps you keep that stance while whipping a fly.


It's no secret that I like under deck storage and this kayak has almost none. One hatch toward the bow gives you some access but not enough to store camping gear below deck. It does have large tank wells above deck where you could lash things down. A curious thing about that, though there are eyelets mounted throughout the kayak, there is no bungee included.

While the K12 is stable, it is also tall. Tall in the water and the ease with which it glides also causes it to be windblown. You will want an anchor trolley (if not two) if you plan to hold your position in any kind of wind.

Probably the most frustrating thing on the K12 was the included tracks. The seat is anchored to these tracks. Unfortunately the upgrade seat that mounts to the metal frame and then slides into the included track doesn't fit. The frame uses t-bolts and they wouldn't fit in the included track. I also tried my RAM rod holders which use t-blots and then my small screw ball mounts. None of them fit. The track was too small. I had to use some southern ingenuity to get the seat to mount and it didn't feel as stable as it should. If you are going to offer track, it has to work for multiple items.


For the fly fisherman, the flats stalkers and the river runners, this is a pretty good kayak for you. If you are going to be on lakes, you'll want to look into the trolling motor mount or go a different direction. Stability is pretty good so if you want to stand and fish, this could be a great option for you. It's not versatile enough for my uses but has a definite market out there.
Posted by Chris Payne No comments: Links to this post
Email ThisBlogThis!Share to TwitterShare to FacebookShare to Pinterest
Labels: Chris Payne, k12, KC Kayaks, reviews

With two new projects ramping up in the last 60 days, I am increasing the amount of testing I am doing. What that means for PPF and the other projects is more information on more gear for people to look over and decide if it is worth their hard earned money or not.

Over the next month I'll be testing out these products and possibly more: