Should Trolling Motors Be Allowed in Kayak Tourneys? 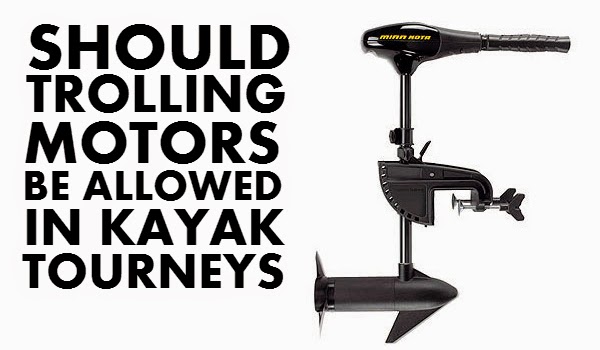 ICAST and Outdoor Retailer showed us what the kayak industry is moving to: motorized kayaks.
At least that's what it feels like. So how long will it be until they are allowed to fish along side human powered kayaks in tournaments?

Wilderness Systems is working on the ATAK kayak, Old Town has the Predator XL, Ocean Kayak has made the Torque for several years and more companies are joining the fold every year. Some companies like NuCanoe design their kayaks with the idea you might mount a trolling motor on it.

In the kayak tournament scene, very few tourneys allow kayaks that have trolling motors. It is thought by most to provide a distinct advantage because the angler doesn't tire from propelling the kayak. The ban is often also applied to sailboats and catamaran style kayaks like the Hobie Adventure Island as well.

Should trolling motors be allowed?

The people for inclusion claim this would allow seniors and people with disabilities to participate which could continue the growth of the sport. With more models of electric motor kayaks becoming available, inclusion would be the natural thought. More people competing means larger purses, more sponsorship which also mean larger purses and wider reach to continue to grow kayak fishing and its eventual national tournament trails.

That sounds good. In theory.

The people against it claim it is a distinct advantage. Fatigue sets in faster when your body is having to propel the kayak. The advantage grows even greater in adverse conditions like high winds. The motor powered kayak would have the ability to cover more water, make more casts and fish longer throughout the day.

In cases where the entry fee is fairly benign (think $25 or less) and the winnings aren't much over a couple of hundred dollars, I can see people being a little more lenient. Let's talk big for a minute.

Large trails are popping up as large events have been attracting more attention and it is only a matter of time before purses of $5,000+ are available. If you pay $100 to enter, $250 on gas and lodging, $100 in food, do you want to compete against someone who can cover three or four times the water as you, make more casts than you and fish more spots because wind and waves effect them less? You have $400-$500 on the line to win $5,000. Are you ok with that knowing you are at a disadvantage?

I'm very curious to see what the kayak community has to say. We are on the precipice and this issue is being decided. It would be nice to have some input. Please comment, share and discuss this so your voice can be heard. Now is the time to speak up and state your case. For or against, help the trails deciding these things know what you think.