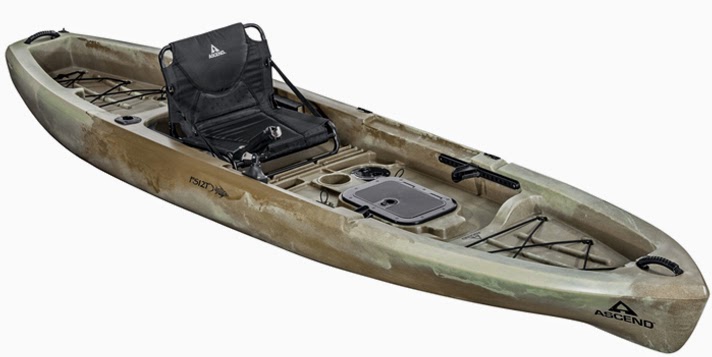 Bass Pro Shops has been selling kayaks for several years but took a new step this year which could change expectations. Previously only kayaks in the $1,000 range had a frame seat (think lawnchair style). That all changed earlier this year with the introduction of the redesigned Ascend FS12T. Here are my thoughts:


The seat is definitely comfortable. This is such a vast improvement over the previous strap in seat that I had to mention it first. Stability is pretty good as well. I stood up without an assist strap and was able to rock back and forth.

The kayak paddles pretty well. Even in chop it avoids nose walking too much. The width is enough to provide stability but not too much to make it a barge in the water. This is not a kayak for the ocean but should perform well in small to medium sized lakes, rivers and coastal bays.


The first thing I would change is the deck layout. There are a couple of recessed areas that don't have scuppers or an ability to drain. I would also stop mounting the rod holder on the right rail. Pre-installed rod holders are rarely where the purchaser wants them, especially the non-flush mounted kind. This one is no different. It's right in the middle of the paddle stroke.

If you are using the seat in a forward position and weigh over about 150 pounds, putting pressure on the foot pegs can move the seat back into the furthest position. This isn't ideal for shorter adult paddlers but works fine for folks at or above six feet tall.

The finish out could use a little work as well. Some padding to reinforce the seat under the deck and a little less sloppy on the sealant around hatches would go a long way.


All in all, the new Ascend FS12T is a great option for an entry level kayak. The frame seat at the sub $600 price point is breaking the ceiling of options for entry levels. This is definitely worth a test paddle.

If you do have issues BPS has an Ascend Hotline for anyone with part issues.
417-873-5034Just give them a call and they can help with replacement parts for Ascend Kayaks.Ascend kayaks are made by Tracker Boats, right here in the USA.


A potential fix for the home DIYer to fix the seat issues can be found here: