Fishing with Kids: Adventure Over Fish 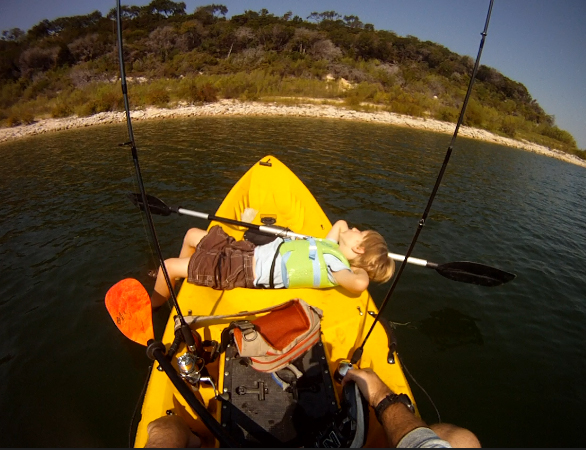 If you enjoy the outdoors and have young children, you may have thought about taking them fishing. Some of the hesitant dads I've visited with worry about if they will like it. They worry about not catching fish. They worry their kids will not really want to fish.

The fact is, kids are just kids. They don't have the hangups and expectations you do. The outside world is a bigger playground to explore with boundless limits. If you decide to spend your time fishing on a fishing trip with kids, don't plan on fishing. Plan to spend time giving instruction and celebrating small victories. Don't be surprised when your future fisherman wants to explore and look for bugs or fossils rather than fish. Encourage it.

The adventure of the trip is what will keep them wanting to come back.

If you have a kayak, take your child along. Rent a small kayak for them or just go play in yours. Eventually as they get more comfortable you can incorporate fishing too. Tandem kayaks are great for these outings and are often available for rental if you don't have one.

I didn't get my start in fishing from a kayak but it was an adventure that kept me coming back for more.

I can’t remember a time in my life when I didn't have a fishing pole. I also can’t remember the first time I went fishing. I have a few vague, water color type memories of small bream and a sunset but nothing else to really tie them together as a memory.

I do remember when I became hooked on fishing though. Every single detail.

My dad had taken me to Lake Trammel, a small impoundment outside Sweetwater, Texas. He and my grandfathers had outfitted me with a few lures they felt they could part with, a rod, a Zebco 33 and a lot of smiles, shoved into a small tackle box. Dad had found an area with lots of coontail that held some black bass. When we arrived, he tried every avenue to convince me to not tie on a lipless crankbait. He knew in short order the gold Cordell Rattlin’ Spot I tied on my line would be a donation to Poseidon.

30 seconds later he thought he was right. After a short cast and a couple of cranks I was tugging, pulling and making quite a racket. I couldn't get my lure back. He sauntered over with a half smirk on his face when I was pulled forward. Weeds don’t pull back! After a short fight he held the fish while I ran to get that blue stringer I had insisted on bringing along.

A two and a half pound giant black bass was toted home and shown to anyone who would look. After a few pictures, most of which I cried through because of the bristled teeth of my foe, the bass was prepared and made into a nice meal. The cycle had been completed and a new angler born. Little did any of us know that this one bass would start a fire that has yet to be put out.

The adventure, the story I would tell is what kept me asking to go back for more. The approval I was met with was great but when I think fondly about that trip, I see the trees, the water, the big, big world that was different than what I was used to. I remember the stringer. I remember that lure. I remember it 30 years later like it was yesterday. The adventure is what I seek and crave even to this day. That's why a day on the water without catching a fish is still a relaxing, refreshing experience.