Kayak Fishing is for Girls…Too 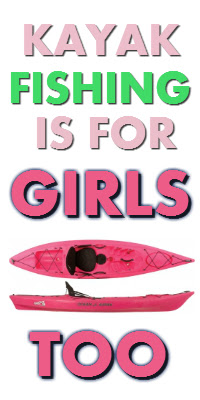 Trip after trip on the water I meet new faces. I talk to folks from all over the state and country about kayak fishing at shows, get togethers, informal gatherings and social situations. After talking way too much and not paying attention enough, I finally realized a lesson I learned well last week and it was driven home this
morning: Kayak fishing is for girls…too.

Kayak Fishing is for everyone. I rarely see the gentler sex on the water, fishing pole in hand doing battle with the scaled phantoms so many of us guys chase. Last weekend however, I had the privilege of fishing with Nina Kavon of Team Hobie-Finland. Nina grew up around fishing. Her family owns and she now runs a fishing shop in Finland. She can also catch bass with the best of them which she proved by winning a big bass award at the 2nd Annual Hobie Worlds last Fall. Nina has the instincts, science, and desire to be on the water that all of my kayak fishing buddies do. She’s not the first that I’ve met though. Just the most recent. A handful of female anglers have shown their prowess in our sport but it was a group of seven year olds that opened my eyes.

This morning I presented kayak fishing, the science of fishing and the motivation to work hard to accomplish dreams to an elementary school. Almost 200 kids attended my sessions and during each period, the small group was asked the same question: What do you want to be when you grow up?

Keep in mind this question was setting me up for a “work hard to accomplish your dreams” segue but four little girls sitting together stopped me cold.  Each one of them answered the question the same. “I want to be a kayak fisher.” It never dawned on me that little girls might want to do something most little boys think is cool! I have a four year old daughter and she loves kayaks but I always attributed that to osmosis. These little girls at the school had 15 minutes of hearing about the sport so many of us love and they were ready to jump in. I thought that was so cool! After mulling it over through the day today, I realized I have neglected talking about cool things that might apply to the female readers of the site. Or even the guys who care about style and design.

Today I would like to rectify that. As much as I can currently.

Chad Hoover over at HOOK1 started to recognize this trend long before my brain cells connected and started carrying bungee (shock cord) in different colors. Most of us guys look for a cool colored boat but see the accessories as utilitarian (with a few exceptions, Walker N.) Being utilitarian, most of the kayak accessories on the market are black. Black is easy, it doesn’t get dirty quickly and has a manly Darth Vader look to it. Some of the folks out there are looking for a little more pop in their accessories and that is available more and more. The pink shock cord will add a dash of color to any kayak but looks great on a lime green kayak. It even looks good on camo!

Chad has been working on expanding colors in not only shock cord but also sound dampening materials and clothing options. He’s helping the industry expand and listening to you ladies. Let us know what you’d like to see. Leave a comment here, on Facebook or at the HOOK1 site.

I can’t speak for Chad, but for me, you’ll get results a lot quicker if you tell me what you’d like. I’m listening now. Let me know!