Over the last year I've been impressed with the saltwater baits I've been using from Treasure Coast Tackle. Based in Florida, these guys sell what they use. You don't get tons of hype and it's likely why you may not have heard about them. Until today.

I've ordered several of Paul Van Rheenen's Unfair Lures baits from TCT and love the action and ability to catch fish. When Erica contacted me about checking out the Monster 3X line of soft plastics I was more than happy to oblige.

Here's what I liked and what I think can be improved upon for each of the three styles I tried.


This segmented shrimp bait has a ton of tail flutter and mimics a fleeing shrimp very well. The colors it comes in are the typical coastal colors you would expect. (In silty water try the chartreuse color but in clearer water look at the natural brown or moss.) As claimed, the baits are tough. You really see this when you penetrate the hook. The X-Move isn't like some of the competitors that have a sandy gum feel to them. This is flexible yet rigid plastic.


The issue I had with the X-Move was actually the segments. If I used a longer shanked hook or even just a larger jig head, the penetration point was in the segments which hindered the action. This won't be a problem in the larger 4.75" version but if you are fishing the smaller shrimp you have to size down on the hook. When doing that, you may miss some short bites. After some abuse from small sound trout after a few dozen casts, the tail can become a nub. Or maybe I need to work on my hookset. These also don't work well with jig heads I already have. I really like the Rockport Rattler jighead but it won't work with this bait. A no collar jig head is best.

This non-segmented shrimp bait has a realistic look to it and seemed to work best under a popping cork which gave it a little more action. The colors varieties are good.  As claimed, the baits are tough. You really see this when you penetrate the hook. The Ultrasoft is an even more durable option to the X-Move without the segments and has a super soft feel to it which should allow a few more seconds of retention when eaten.I really liked fishing this on a split shot rig to let the bait fall naturally with just enough weight to get it where I wanted. Try a sharp 1/0  offset worm hook.

Collared jig heads are a no go here as well. The bait needs a little more action so varying your retrieve is more important with the Ultrasoft than with the X-Move. I'd like to see a thicker body too. This is a pretty skinny bait and won't put off as much disturbance in the water as a thicker bait. Feed it some fast food and I think you have a winner. Also a note, don't mix these baits with others, they'll color blend. 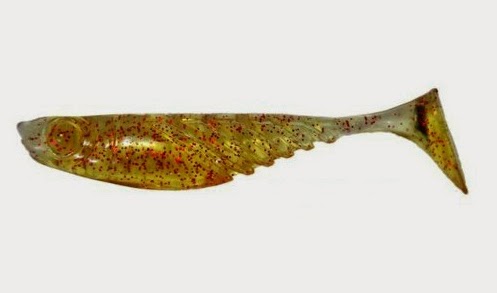 
This was my favorite of the three baits to throw. The Slimshad is versatile as it can be fished in fresh or saltwater and appeals to a wide variety of fish species (and snakes but that's a different story). White bass, black bass, redfish and trout all like the Slimshad. I used the pearl color exclusively and it slayed the fish. I paired it with a belly weighted hook to make it weedless and swam it through dang near everything. They come three to a pack and I still have two that haven't been used. This is tough material and the toothy trout and angry whites haven't torn it yet. Spend the $6 and you may have enough swimbaits for a month or more! The Slimshad doesn't lean side to side and swam true right out of the package. If you really wanted to get crazy, try a couple of the 2.75" Slimshads on a tandem rig under lights at night.


The only real problem I had with the Slimshad is getting scent to stay on it. More specifically getting a ProCure gel to stay on it. The bait isn't very porous so my guess is the gel eventually just washes off. It's really my only knock on it. If it came super impregnated with a menhaden smell, it'd be the most deadly bait in my arsenal.


I'm looking forward to getting back down to the Texas coast during the flounder run and test these out for the flatties. It will also be a good test as to durability. I'll make sure and report back in the middle of October. If you haven't tried them yet, it's worth the $20 to try a three pack of each of these. If you'd like a little help with that price use code : TEXAS7 at checkout to get an additional discount. Thanks to TCT for allowing me to help you out with that. Whenever I can pass a savings on to you, I'll do it.

The age old question with a fishing twist: What's your favorite color?

I spent some time with family this weekend, talking fishing, shooting some clays at a five stand and enjoying way too much food. Any time we talk fishing, color and style comes up. We fish a lost of soft plastics in our family. They are versatile, fairly inexpensive and produce every season of the year. The styles and colors however, are diverse.

My brother loves to throw a Junebug colored Yum Dinger. He especially likes to throw these when he can find it in the 3" variety but now they're almost all 4". I'd call him crazy but I've seen him consistently put fish in the boat.

My Dad throws a lot of different baits but if I made him choose one, and he could find it, I'd bank on the 4" Berkley Power Worm in Camo. A close second would be a sandworm.

For me, it's a 4" Hag's Tornado in Watermelon Chartreuse. Is it any wonder I do a lot of finesse fishing? My whole family does it and has for decades.

So if we fish the same waters primarily,together much of the time, why different color preferences?

I feel like I could catch Moby Dick on a 4" Hag's in WC. I have consistently put fish in the kayak. If I have a skunk day going on, I know I can catch fish on it. The first time I thought it could happen and it did, the confidence started to build. As I repeated the cycle and it continued to be true, it became known to me that I could put a fish in the boat with this bait. I proved it again on Friday. No fish the first three hours. Switched back to my confidence bait and bam, two fish in 10 minutes.

I have seen my brother catch what had to be every fish off of a bank on his bait. The same for my Dad. When I try to use their colors the results are underwhelming.

The cool thing is, it might be a color on a crankbait at a certain lake. I know a guy like that. He has won a lot of money (some of it mine) on a Central Texas lake with one particular color. He knows it's special too because that is a secret color only a few know.

I have another buddy who has a particular style and color of trailer he uses on spinnerbaits.

Call it hocum, voodoo, confidence or coincidence but I bet if you think about it for two seconds, you have a color you always go back to.

So, what is it? Let me know here in the comments or on Facebook.
Posted by Chris Payne 2 comments: Links to this post
Email ThisBlogThis!Share to TwitterShare to FacebookShare to Pinterest
Labels: Chris Payne, colors, confidence, crankbaits, dad, paynespaddlefish.com, soft plastics
Older Posts Home
Subscribe to: Posts (Atom)