The danger of planning a trip to the coast months in advance is the unpredictability of the weather. The forecast continued to worsen as our trip neared and backup plans were formed. As we arrived Thursday with kayak seating for 5, we saw that an assault on the gulf wasn't going to happen. Winds, cross currents and angry seas greeted us as we emerged on top of the seawall. The 20 minute drive west was spent scheming and looking for other possibilities. A new kayaker was in our mix and I didn't want his first time out to be a bad one. We arrived at camp and setup, checking weather forecasts, tide charts and wind predictors. There was a window on Friday that seemed doable so we planned for that. 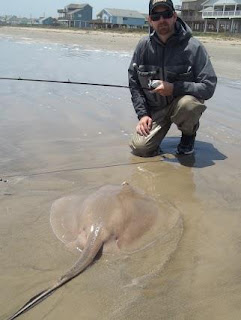 Thursday evening was spent procuring bait (shrimp and squid) and fishing in the surf out past Beach Access 25. Within two hours we had landed a 27" redfish, a huge stingray and myriad whiting and hardheads. I nicknamed the red Homer Simpson because he had a huge gut and a donut for a spot. He is pictured over to the side. The big shark rigs squealed only once and a 20 inch hardhead was the culprit. All of the big fish came on a St.Croix Mojo Bass medium heavy rod with 15 pound HALO P-Line Flouro. 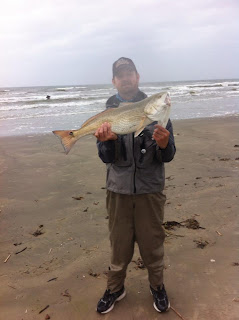 Thursday night I ventured out into the canals and was nearly blown off the water. The 12 foot Native Slayer has a lot of surface area above the water and it showed. I could see well in the high seat position and almost as well in the low position. I decided I would use the front well with the added hatch as a fish box if I caught fish but sadly never got the chance to use it. I discovered that the square console with the track in front of the seat does not fit a GearTrac t-bolt without removing the hatch and loosening the track. That is disappointing. The side tracks have no issue but the sides of the recessed molding on the front square come up to high. I also quickly discovered that using a Park-N-Pole in the large scuppers is a bad idea. The scuppers are so large that it allows the boat to climb the pole in wind. It was tipping the boat. Make sure you install and anchor trolley. While you are installing things, know that this boat doesn't come with rod holders or a paddle clip or bungee to strap down a paddle. You might want to pick those up as well. The front well is greatly improved with the hatch cover. Even in the driving rain coming home it did not take on any water. That's at 70 MPH in a monsoon! To give you an idea of how bad the storm was, it peeled half of the vinyl decaling off of the kayak. Paddling the Slayer is fairly easy. I would recommend a rudder for turning. I didn't have one and it showed. The secondary stability in the boat takes a minute to get used to but you quickly figure out where the points of no return are.

The Slayer is very similar to the Jackson Coosa in some respects. The chair, the open deck layout and the room/ability to stand are qualities they both have. The huge difference to me is the Slayer's incomprehensible lack of storage below deck. A hatch could be made in the front well or floor that would allow you to stow rods and gear, especially in the salt. The only access you have is a 4" hatch with a bucket in it. Not going to cut it.

I do like the wheel on the back. While it is lousy in sand, moving it to and from places on grass and concrete is easy. It can be a touch tippy from side to side if you are loaded down so be aware to keep center when pulling it. The wheel also adds a nice assist for car toppers. Combine that with the handles at midships and most folks can put this on a car solo.

To be fair and thought out as much as possible, I will be spending a few more weeks fishing the Slayer in freshwater on lakes and rivers/creeks. I want to really put it through the paces and see what it can do.

Back to the fishing report.

Friday saw more fish being caught in the morning including but nothing noteworthy other than some additional  black drum. Friday afternoon came quickly and we wanted to get the kayaks wet. We found what we thought would be an out of the wind spot on the far west side of the island and launched. 20 yards into the bay we felt the wind pushing us every direction. Anchors wouldn't hold so we paddled a bit, fished very little and after an hour we could see our newly initiated kayaking brother was wearing out. We all headed in with smiles and high fives though the wind was still beastly.

We arrived back to unload and decided to go pound the waves again. This time it was significantly different than the morning run. We couldn't make the third gut because of the tides so we had to settle for second gut fishing. That made a lot of difference. In a short 90 minutes we landed four more black drum, three large gafftops, another stingray (much smaller) and a 35" red. Sprinkle in another 30 or so whiting and it was a great afternoon on the water. Exhausted we turned in fairly early and planned one last assault on the surf.

Saturday found only a pair of us in the water at daybreak and we fished the second gut again. One more slot red yielded to our fresh dead shrimp and several additional whiting. After a couple of hours we called it quits with the looming storm. We cleaned our fish and headed for the mainland. It took 6 hours to reach home, two hours more than normal because of the blistering rain and I had to pull the scupper plugs in the Slayer but the trip home was fairly uneventful. Cars were still moving slowly as we traveled through Houston but right after we hit 290 the bottom dropped out of the clouds and made the news. Between the hail, floods and swamped out cars it turns out looking at the weather paid some dividends. All in all a good trip with good friends and a new kayaker. Looking forward to the next trip already.


Side Note: I have had a few additional things come into play so the paddle reviews will be later this week.