Is Catch and Release Hurting Our Lakes? 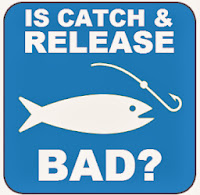 From the time I was little, I remember hearing that bass (large and smallmouth, not the white ones) are for catching and catfish are for eating. The only bass kept around our house was a large one that died and was skin mounted back in the late 80's. We caught lots of bass growing up. We would take pictures and then release them to make more babies for years to come. That's the essence of Catch, Photograph and Release.

Catch and release is a noble thought. Your prey gives you entertainment, you see value in that and want the fun to continue in the future so you let it free to fight another day. Sounds kind of like the Roman Emperor in Gladiator letting Maximus live. We build tournaments around this idea too. It is noble but is it harmful?

The Tennessee Wildlife Resources Agency put together a book for ponds and small lakes to discuss many aspects of maintaining a healthy population balance. A quote that jumped out at me very quickly was, "Fish must be harvested regularly for the population to remain in balance." More to the point it says, "The best way to avoid overcrowding in a pond is to harvest fish regularly and in adequate numbers."

That's all well and good. But what about lakes? Does this apply to lakes? Don't people already harvest these bass?

It isn't that simple says Dr. Mike S. Allen from the Department of Fisheries and Sciences at the University of Florida. Allen shares in a paper, "...size limits are a tool for fisheries managers and have the potential to improve catch of large fish and total harvest. However, size limits will not improve every population! Fishery managers in Florida use specific regulations to improve fisheries that have rapid growth and good recruitment, such as the 15-24 inch slot limit on bass at Lake Istokpoga. Conversely, other fisheries with slow or moderate growth are often managed with more liberal size limits to allow anglers to harvest slower growing fish. The potential for success depends on ... each population!"

So what should we do as tournament fishermen?

If a fish population seems skinny and long, should we change our format for that lake to a harvest format? Should we use stringers?

Debra Dean, Editor of Honey Hole Magazine, has some thoughts she shares on the subject. She writes, "The art of catch and release could be on the verge of be coming the next big concern of fishery managers and biologists. It's actually already been under scrutiny for some time because keep-and-eat is what's supposedly missing from "workable" slot limits. Fisheries biologists claim that the only way slot limits really work for any lake is for small fish, those under the slot, to be retained in larger numbers than what is currently in style with bass fishing society (which is practically none).
But they were inclined to support and promote catch and release as part of their fisheries plans and perhaps had hoped to strike some kind of balance between live release and a visit to the table, for bass in particular. No one realized that catch and release would become THE THING TO DO, almost a religious experience, for bass anglers and that such a noble ethic could become a problem for fisheries management."

But what is the right thing to do? Is a tournament needed where the aim is to harvest the heaviest bag of fish under the slot at lakes like Fork in Texas? And then have a fish fry after?

It's not easy to decide but it is one that needs to be discussed. So what do you think? Is catch and release hurting our lakes?