Anger! Outrage! Lots of four letter words are running through my head. The fact that this has been going on for 50 years and I am just now hearing about it means it is not getting near enough attention. 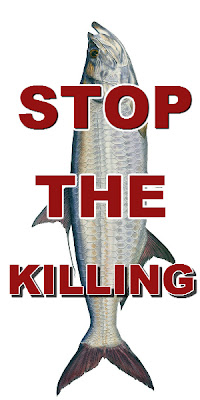 Tarpon are being slaughtered only for sport (seriously sport?) by divers in international waters off the coast of Louisiana.

Here is a link: http://flylifemagazine.com/conservation-wanna-know-what-the-absence-of-any-regs-looks-like/

I believe in catch and release, I only harvest certain species, and like for the big mommas to grow and make more babies. These spear fishermen are boating trophy tarpon for bragging rights. Is it legal? Yes. Technically it is. The tarpon are in international waters when they are harvested. Does the meat go to good use? Nope. It goes in the garbage. Kill it. Weigh it. Dump it.

The other problem with this scenario? Tarpon migrate. These fish they are killing are not only Lousiana fish but Texas, Mississippi, Alabama and Florida fish too. I've never been lucky enough to even hook into one of these majestic giants. Now it is starting to become clear that it may never happen. If we don't protect tarpon in international waters too they will be poached and gone. The group is called the Hell Divers Sportfishing Club of Louisiana. They say this is happening in the name of research.

Read this from the leader of the group about an upcoming event:

Nice. A bounty for breeding females who have to pass through these waters.

This is the equivalent of having a big bass tournament at Lake Fork to see who can spear the biggest females off of their beds, weigh them in and then dump the carcasses. Would that EVER be thought of as good for the sport, ecosystem or population?

I am a little worked up about it but so should every fisherman who cares about the sustainability of a natural resource. PLEASE PASS THIS ON. Share it using the buttons below via every available network you have. Keep sharing it and passing it along. Something must be done.