My Love-Hate-Love Relationship with Braid 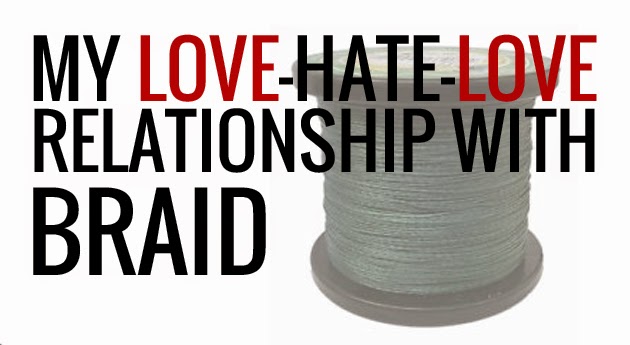 A little over six years ago I was introduced to using braid on spinning reels by Gary Yamamoto. He explained it to me, talked about tying a flouro leader and proceeded to catch a lot of fish with it. I picked his brain a while and decided I needed to make the switch from mono to braid on my spinning rigs.

I loaded up my reels with some 50 pound braid that was on sale and went to the lake. It was a pretty good trip and I gained some confidence that fish weren't as afraid of braid as I thought. After years of being told I needed invisible line I was learning there was more to it than that. I could have both with a leader. I also quickly learned that a leader really only made a difference in clear water.

The first few trips went well and then it got windy. My first experience with wind knots was a bad one. I managed to foul up that cheap braid on two reels. I cursed the whole way home and got out my knife as soon as I took the reels out of the truck. I cut that braid off with a vengeance and swore to never go back.

I had the opportunity to fish a 35 acre lake in Central Texas. I was told most of the fish were small but they would be plentiful. Looking to knock off some winter rust, I took my spinning reels, loaded with mono, as they had been for years to enjoy some quantity fishing. As always happens when I underestimate, I found a wolfpack of fat, hungry female bass and watched four in a row go airborne, bury deep in some grass and break me off. I was toast. Pissed off, disappointed and tired I loaded back up and drove home.

That night I talked with some friends and they recommended braid. The water I fish is mainly clear so I needed to cast for distance and use a leader. That combination meant spinning reels loaded with braid. That evil devil had crept back into my life. I shared my story with them and they laughed. Apparently the brand of discount braid I had used was awful for knots, casting and the like. I buckled down, bought some Power Pro Super 8 Slick and took another bit of advice. I downsized to 10 pound braid, I thought they were crazy but hey, I've already gone back to braid so why not downsize and see if it works? I still had a knife if I needed it.

A couple of weeks later I got my revenge on those fish at the 35 acre lake. Six years later, the wisdom I was given still holds up, as long as I don't go cheap and make sure my gear meets up with the quality of fish and quantity of fish I'm chasing.