When searching for a paddle kayak this fall, I had very specific criteria. I wanted lots of under deck storage, higher weight capacity, a wide boat for standing and casting and a decent rocker if I ventured into windy waters or out beyond the breakers.

The kayak I decided on was the Malibu Stealth 12. I have had it out a dozen or so times including a tournament for approximately 100 hours of on the water time.

Some notes about the specs. The width feels wider than 33". Standing and sitting is a breeze because of the graduated hull design (not flat) that gives multiple levels of stability. The large front gator hatch, aside from offering roomy access to the hull interior also doubles as a child seat up front. The livewell is not pre plmbed save for a drain plug. This is easily done from a youtube video and a kit however. The transducer mount works great and was a solid fit.


The Stealth 12 is pretty lightweight compared to other kayaks of similar length and width. This makes it easy to cartop or throw in the back of a truck. The gator hatch gives a cavernous access to the interior. Previous models had issues with water intake around the hatch but with a redesign, new buckle securing positions and a better seal, this has not been an issue in any of my outings. No kayak is watertight so less than 4 oz of water in the hull after eight hours on the water is a good thing especially in rough conditions.

The FND version has four flush mount rod holders pre-installed and work well. The specialized shock cord cleats throughout the kayak hold the bungees in place and keep you from getting snapped with the larger head on the cleat. There are multiple places throughout the kayak to mount rails and accessories which is nice.

The livewell is under a large oval hatch and also has a quick entry port in the middle. This keeps your bait from being able to escape when they see the hatch open. The hinge opens the hatch away from you so it's easy to access the entire space if needed. It does not come plumbed so you can use it as dry storage as well as long as you leave the drain plug in. Additionally, if you fit a screen in the drain hole you can keep bait in with fresh water without having to run a pump.

The rear tankwell is large and has room for a crate and a small cooler as well. It does come with multiple scuppers in the tankwell as well as the main deck so water has an escape point.


The Stealth 12 needs to come with a standard seat and needs to have connection points at the hinge of the seat that will connect to the hull. The standard Crack of Dawn seat tends to slide forward, covering the lip of the livwell hatch causing you to have to adjust to get in there. Obviously padding on the lumbar and glute sections of the seat would be nice.

The back tankwell has no hatch installed. There is a circular raised section that I installed a 4" hatch to allow access for rigging and in case something gets wedged in the hull. It's a small change but well worth it in my opinion.

The side handles for lifting should either have longer straps or be rigid. The soft handles tend to pinch your hand up against the side wall when lifting with one hand and sometimes two. Rigid handles I think would be the way to go.

The black hatches in the middle of the kayak have a raised texture on them but the plastic can be a bit slick when wet. Putting an EVA foam in the standing section or offering aftermarket pre-sized foam with adhesive for the two sections where you feet rest would be optimal.


The price point on this kayak (around $1100) makes it a great value for those looking to stand, fish rough water and be able to transport easily. It is not the fastest kayak on the water but handles different water types well. In smooth water it will be slower than most but where it really shines is in the rough water scenarios. The graduated hull and scooped rocker cut white caps and allows you to keep pace with most kayaks. The wind doesn't affect it like a lot of high walled kayaks and the ride is pretty dry. I'm using this kayak throughout the 2014 tournament season.

I will have the "Green Goblin" my lime Malibu Stealth 12 on display in the Mariner Sails booth at the Texas Tackle Hunting and Boat Show this weekend in Mesquite, TX. Come by and say hi!

Santa Claus Knocked Me Out 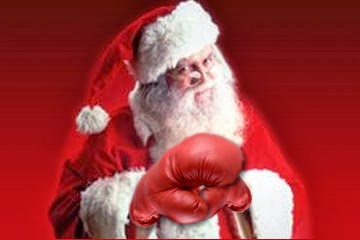 Santa Claus knocked me out. More specifically, The First Annual Santa Claus Classic. I'll have a full tourney report later next week for Cap City Kayak Fishing but for now, here is my story.

I knew Saturday was going to come early. This weekend was my son's birthday and we wanted to do it up right so we went to his favorite restaurant and then to see the new Hobbit movie. The movie got out and we arrived home Friday night at 11PM. I had a 3AM wake up call to get loaded and down to Austin by 5AM. Unfortunately at 1:30 alarms started going off and it wasn't my clock. It was my back. I had a burning, searing pain between my shoulder blades. I couldn't turn my head and I had to roll carefully to get up out of bed. This was not good. I had Robert Field down from Dallas, already set up in Austin and I couldn't let him down. I gulped some Aleve and Tylenol and closed my eyes for a few minutes. The alarm went off again, this time an actual clock, and I got out of bed in more pain than previously.

I ran through my mind whether or not to keep stretching and hope the medicine would kick in or call Robert and admit defeat. After 35 minutes of agonizing physically and mentally I decided to load up, fight through it and go. It was for charity after all.

I sent the red bearded Aggie a text saying I was about 30 minutes behind schedule and he said no problem.

We checked in, chatted for a minute and headed to the launch spot. I took forever to get unloaded and the sun was starting to peek out before we launched. Thankfully Robert has a lot of gear to set up as well.

The weatherman predicted gusts up to 30 mph and cold. As we launched we chatted about the cold part being right but the wind seemed to be a non-factor so far. I know better than to say that out loud.

We headed for a well known creek and started tossing baits. I adjusted and fussed at my seat and my back for over an hour. I also got a face full of water and some water down the front of my waders when trying to get out for a shore break. Cold and miserable I battled on for another hour. With little to show for it and a boat parade already formed we decided to move. As we rounded the corner at the mouth of the creek the wind proved the weatherman right again. We paddled for what seemed like six years against the wind to go try some deeper water. We wasted an hour before regrouping.

At this point I was biting my lip from the pain. The medicines I had taken seven hours previous were useless. We decided to grind out the rest of the tourney in the creek, out of the wind. As we ventured back into the mouth we saw we weren't the only ones with that plan.

The plan paid off pretty well. We landed five keeper fish in the creek that measured for the tournament. The Hag's Tornado F4 in Purple Haze was my go to. I used my Smith Optics Tenet Glasses to sight cast all of the fish I caught, including the keepers. The five were good enough for 5th Place which was pretty cool. What I didn't count on though was the other fish I caught. I thought at the time it was a big bluegill. It turns out it was a redear. It wasn't the state record I thought it was (and subsequently made myself look like a fool) but it was big enough to qualify for a big fish award from Texas Parks and Wildlife. I'll send off the paperwork this week to get it documented. The redear measured 13.5" long. It was released unharmed and feisty!

The after party at Joe's Crab Shack was festive and merry as always. Boxes of toys for Toys for Tots overflowed and the Lone Star beer did as well. (I can't have it because of my celiac but many others enjoyed it.) A lot of good happened but at the weigh in I was spent. I probably seemed like a scrooge and a bit aloof but I felt like Freddy Krueger had julienned my back. Paddling against that heavy wind twice, meds not working and being cold all day meant for a Grumpy Cat looking Chris at weigh in. Sorry fellas. I feel awful I wasn't more talkative but I was done.

I'll get the full recap with some video from Robert up in a few days but until then, check out the only smiling pics of me known to exist from Saturday. 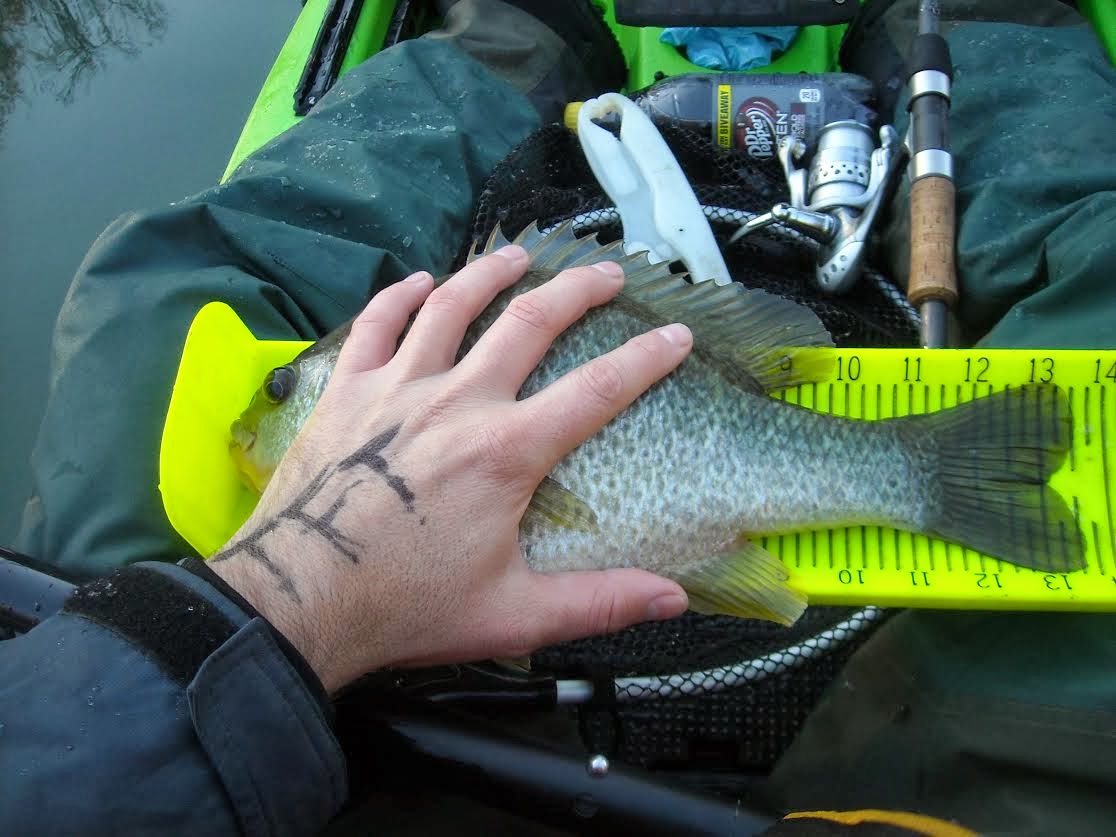 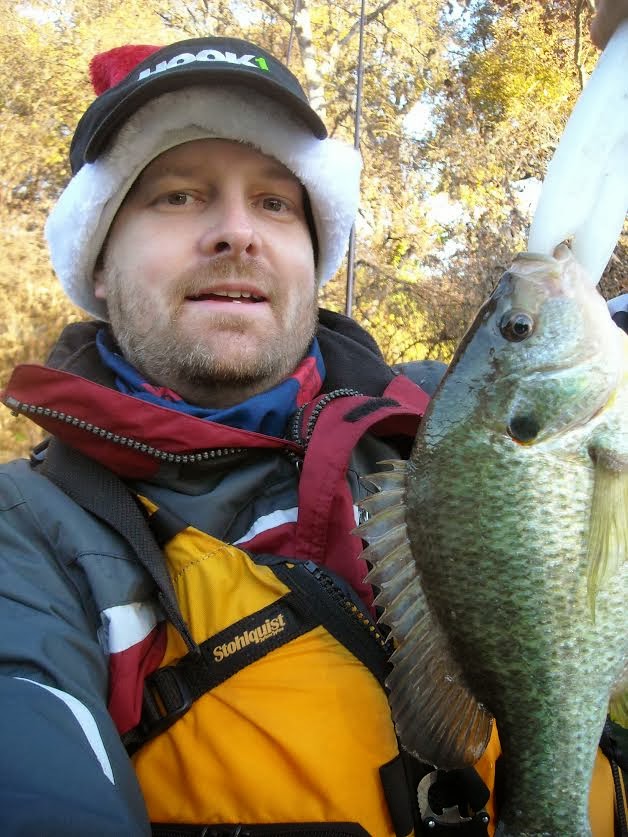 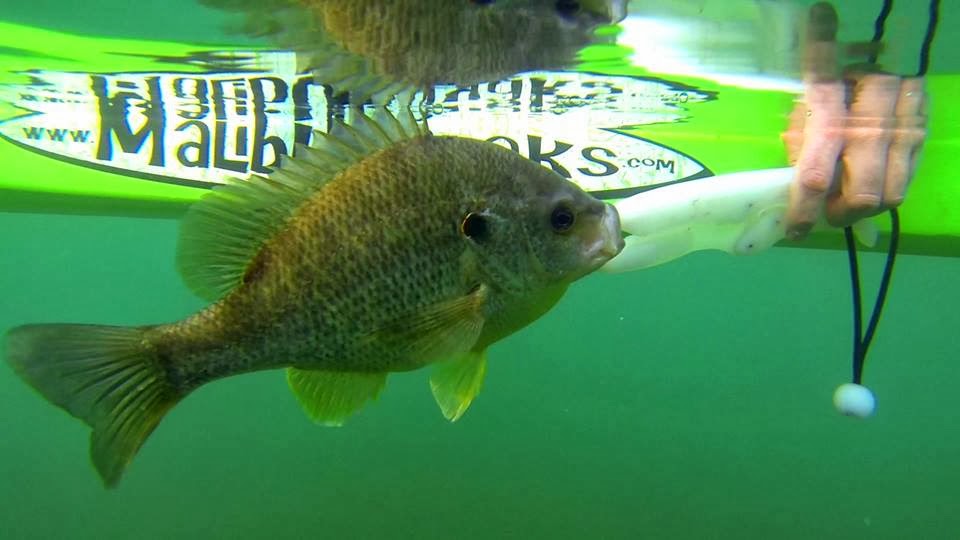 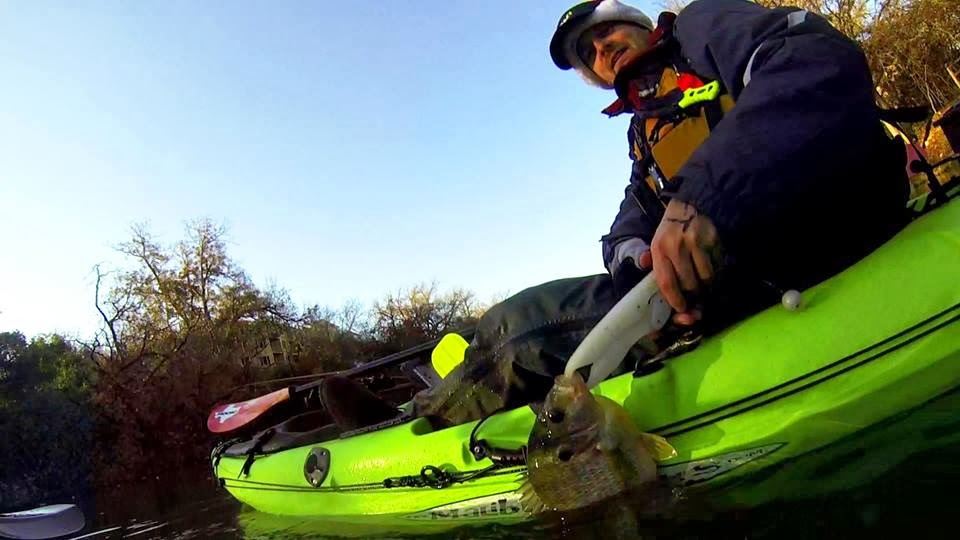 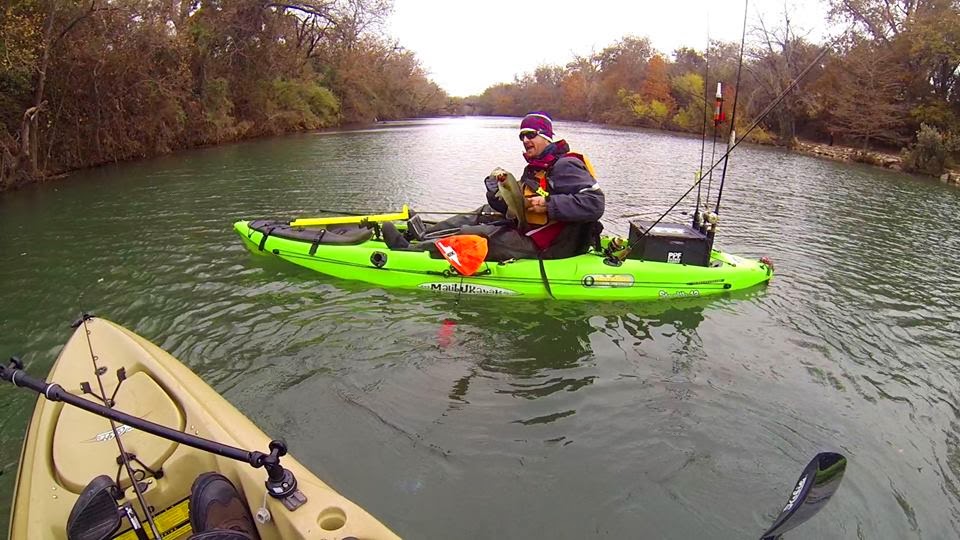