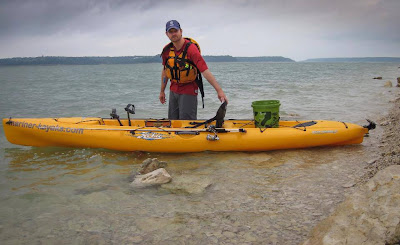 In a word the Hobie Mirage Revolution 13 is: Fast.

From the moment I engaged the Mirage Drive in the Revo 13 I knew I was sitting on a rocket. I had the Turbo Fins locked in and could blaze through the water with ease. The Revo has so many upsides it’s a wonder more people don’t fish out of them. As with any testing period, I located some areas for improvement as well.

The morning that taught me everything I needed to know about this kayak started at 5 AM. The moon was covered by clouds and the sun wouldn’t make its appearance for another hour and a half. I could feel the wind and know that the reported 15mph didn’t quite cover it. 25mph was more accurate though in the dark it was hard to tell. The forecast said the wind would be dying out over the next few hours and the hybrid bite was on so, PFD strapped on, lights ablaze I set off into the darkness on my half mile journey. As soon as the kayak gained buoyancy the wind caught it. I deployed the rudder, pointed the bow into the wind and used the paddle for about 10 strokes. I quickly dropped the Mirage Drive into place and went to work pedaling. Waves crashing over my bow and around the sides told me quite a bit. The rudder held me on course, the Turbos sliced me through the water and a short time later I had made my destination. I had to turn broadside to the waves for about 100 yards and I learned a little more. This weather, though not ideal, was simulating lots of situations that would normally take several weeks to experience. Sheltered and safe, I commenced fishing and for once the forecasts were correct. The wind died to a mere 10mph and the trip back was uneventfully quick. I was able to make two other trips in the boat but none proved as useful as this one.

The Revo 13 is F-A-S-T! I covered the same water I used for one of the Slayer 12 trips and did it in ½ the time. Over 13 feet of kayak helps keep you on course but add in the rudder which comes standard and this kayak will move. Add Turbo Fins and it flies! It will also turn more easily than boats of equal length. The hull weight of just over 69 pounds seems about right or even on the lighter than expected scale.  Three hatches allow under hull access and provide a good place to store extra tackle, gear or clothes. Come to think of it I am pretty sure I left a box of Storm swimbaits in the Revo I tested. The boat drains quick. I really needed it on the nasty weather trips and it didn’t disappoint.

The Revo is a skinnier version of its shorter big brother the Outback. At only 28.5” wide it doesn’t handle broadside waves as dryly. I missed not having the side trays or wider side rails for mounting Gear Trac. I could only feasibly find a couple of locations to fit a 4” Trac and it would be a bit of a stretch at that. The hatches offer access but a major improvement would be to add the Pro Angler rectangular hatch, maybe slightly smaller where the center round hatch is. As it is now, you can only get longer gear like poles or paddles in through the front. That’s ok for lakes, not great for BTB trips. Because the kayak is narrower, if you are pedaling quickly and do a sharp turn with the rudder control,  it gets pretty tipsy. I’m not sure how many times you would do that but it leaves a little to be desired with width stability. I wouldn’t stand in this Hobie. Only the PAs are made for standing but the Outback and Sport are standable models. The keel is less pronounced in the Revo than the Outback and Sport which I feel makes the difference.

So the end all question is would I buy one? Yes. I would.
Would I buy it over an Outback? Not for my uses.
The Revo is an excellent boat and should be very popular for car toppers everywhere. The weight of the hull feels lighter than 69 pounds and it flies when in water.  It is a possible BTB kayak though the shorter model might be preferred by some to avoid telephone poling on re-entry. I wish it were two inches wider and had a rectangular center hatch. Past that, it’s dang near perfect for folks who don’t mind sitting in a more traditional style kayak seat.

Hearing the Footsteps of Death 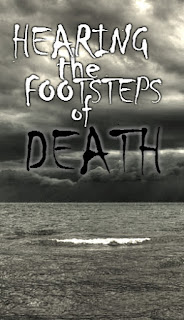 Yesterday morning was rough on the water. I launched at 5AM to what I thought was 10 mph winds. As I rounded the first bend and tasted the first wave, I knew different. Luckily I was in a 13 foot long Hobie Revolution with Mirage Drive and could battle through odd wave angles, two to three foot rollers and a nasty head wind to make my destination, but a few years ago, I didn't have a kayak with these attributes. A few years ago I heard the footsteps of death bounding for me as a freak, unannounced storm rolled in and tried to show me my maker.

Almost seven years ago now I embarked on an adventure. I was living in a new place with lots of new lakes, rivers and kayaking friends. One of these friends called me up last minute and wanted to go fish Lake Belton in our kayaks. Without hesitation I loaded up my 10 foot long sit in kayak and headed to the lake.

Lake Belton is full of large bluffs that tower above the water sometimes 50 feet. The bluffs make great shade to fish in during the boiling months of summer and this particular day called for shade. We trolled lures up and down the bluffs, staying in the shade as much as possible and being new, I trailed about two hundred yards behind my friend. I wanted to see what trees to avoid in the water and not lose any tackle.

The paddling and trolling was producing some white bass and an occasional hybrid so the time melted away. A huge jerk on my crankbait grabbed my attention and almost freed me of my rod. The kayak spun around quickly and I soon learned I had found a tree. I didn't want to lose the bait so I commenced the wizardry of trying to free a crankbait with no bait retriever that is lodged 12 feet below your kayak. After 10 minutes I finally freed the bait, looked up and my friend was gone. He must have kept going and rounded a corner into a nearby creek. With the bluffs blocking my view I could only paddle and try to catch a glimpse of where he had gone.

With the first paddle stroke I heard it. Closely behind it was another one. A loud, low booming sound filled the sky. I thought at first it was cannon fire on Ft Hood but as I listened further I knew this was a storm. With a zero percent chance of rain in the forecast my eyes tried to quickly readjust as the sky turned an angry charcoal. The wind found its breath and started frothing the water around me. Ahead I could see a small gravel bar and an overhang in the bluff wall. I leaned into my stroke and powered ahead.The sky released her hold on the rain and a torrential shower commenced.

With each stroke waves were pounding me from every side, rain blistering my face and water was collecting in the cockpit. After five minutes of paddling I had lost ground. Making no progress I headed the opposite direction, hoping the wind would help. Just trying to turn the kayak was a chore as the water was pocket high inside. I was wearing a life jacket and decisions had to be made. I decided to get into the water. I would try to tow the kayak while swimming to a small shelf I hadn't seen previously. Holding to the kayak handle the wind blew my plans away. The kayak, free of my weight was skimming across the waves. Before I could touch the bottom I had been blown 200 yards from my original position. With a more gradual slope than the steep bluff I had been near, I climbed onto the gravel bank and proceeded to flip the kayak to drain it. I sat exhausted in the pouring rain. The rain tasted salty. And then it hit me. I was crying. Scared, shaken and alone I was crying.

The old, flood-killed trees of this embankment creaked and moaned in the wind as I heard the most haunting sound I have ever heard in my life. The footsteps of death. I had very little fight left in me at this point but I was glad to be alive. The echoing booms of thunder and sprays of lightning filled the sky getting louder and brighter each second. The footsteps were drawing near. It was time to fight for my life. Another decision had to be made.

I quickly surveyed the landscape and discovered a small rock ledge that was as far away from the trees as possible. Trees are lightning magnets and I wanted no part of their potential light show. Wedging myself as deep under the ledge as I could get, I held my knees and my breath. The footsteps were getting closer. With an explosion and searing bright light a tree fell to its final resting place less than five yards away from my ledge. The ringing of my ears blocked out the thunder and I closed my eyes. If it was going to be today, I didn't want to see it coming.

As the ringing subsided a few minutes later I realized the footsteps were gone. Small rays of sunshine were peaking through and painting the now calming water. I remember thinking, "Today was not my day to go."

After surveying the skies, I emptied my kayak one last time, reboarded and went searching for my friend. In short order I discovered him around a bend, alert ok and fishing again. Apparently his time with the storm had not been as much of an ordeal. He casually asked if I was ok. I responded yes and then told him I thought I would call it a day.