Now Available: A Frame Seat Kayak for Less Than $600

It finally happened. A frame seat standard with a kayak for $549.

Manufacturers of kayaks have been scrambling to add offerings of frame or lawn chair style seats the past few years. The growing market of 35-65 year olds wantss something for better back support and kayak makers want to oblige. The problem previously was the price point. For a lot of those entering the kayak market, the $500-$600 range seems to be the ceiling. You want to make sure you like it and not be too invested if you don't right? At least that's the thinking. If you can, please demo the kayak you're wanting to buy. Sometimes that is just not an option. When it's not, consumers compare options and make a decision based on that. 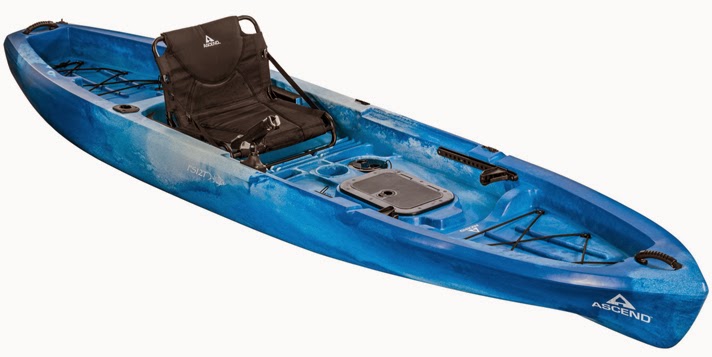 Bass Pro Shops introduced an all new version of the Ascend FS12T Sit-On-Top Angler Kayak. Complete with an adjustable frame seat, large center hatch, day hatch, paddle clips, and side rails for mounting accessories. At 31" wide, with six scuppers and flattened deck, the new FS12T should be an option for those looking to stand as well. It has a 350 pound weight capacity and weighs in at 77 pounds.

So how does it compare with other entry level kayaks? Truth is I haven't paddled one yet. Demos should be available soon at select Bass Pro Shops and I hope to be able to get to try one out. Looking at the specs, it is heavier than the super popular Perception Pescador 12. At an equal price point, the 17 pound difference is about the only advantage for the Pescador versus the new Ascend. The Ascend is 3 inches wider, has access to under deck storage closer to the seat and has two above deck wells with bungees opposed to the one of the Pescador. It's hard to tell the speed difference without actually paddling them but that will be remedied soon.

One of my kayaking friends, Josh, sent me a great idea to do a multi-kayak comparison of kayaks under $600. We are hoping to pull that off early in May and will be gathering feedback from shoppers looking to get their first kayak as well as experienced paddlers.

I don't expect this will be the last entry level offering we see with a frame seat. It also points out that manufacturers are listening and watching. Will these new Ascend offerings replace kayaks like Jackson, Native, and Diablo? Doubtful. What it will do is give people another offering to choose from. Hopefully Hobie and Malibu will follow suit. How many Outbacks would Hobie sell if it had a seat similar to the PA at the same Outback price point? Answer: A LOT! How about a lock in frame seat in the Stealth or X-Factor for Malibu? Yep, they'd sell a ton too. The trick however will be finding a way to do it without inflating the price.