For the last year I have shot all of my video on GoPro cameras. It's what I knew, had an opportunity to buy and thought was the best out there. Last week I was introduced to a camera that I wasn't even really aware existed. That camera is the Drift HD. Aris at Mariner-Sails showed them to me in his store and it got my curiosity up. Being a numbers and checklist kind of guy, I wanted to look at them side by side. I have one now and will be comparing over the next few weeks with some side by side video but I couldn't wait to get started. My impatience resulted in a comparison list and that is what I want to present as food for thought before the field tests are in.

The comparison below is from the specs listed on each of the respective websites. It is also as they come packaged. If additional accessories are available the price is listed in the column. Without further ado: 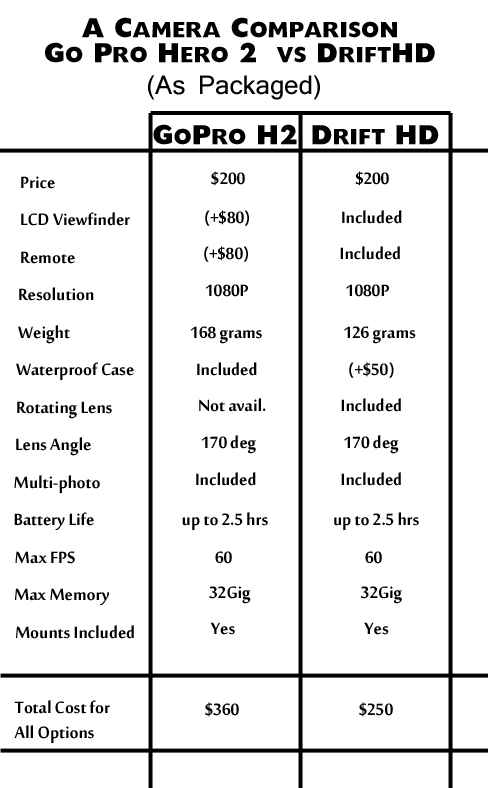 The results surprised me too. Save the lack of a waterproof case, the Drift HD is, on paper, the superior camera. The Drift HD has better features out of the box for less overall money. The puzzling thing to me is why Mariner-Sails still has a few left. Originally priced at $299, you can pick one up for $200 today.

From everything I have read and videos I have seen, the field test will show equal footage if not better from the Drift. Drift has a new camera out, The Ghost, that has additional options that mark it as equal or better than the GoPro 3. I'll report back on that one in  a few months.

If you need an action camera for your adventures, call or get to Mariner-Sails today and pick up a DriftHD.